Reach All Staff with Rapid Alerts and Communication

West Michigan Academy of Environmental Science is reaching all staff with rapid alerts and communication.

Read this customer story to learn how West Michigan Academy of Environmental Science is reaching all of their staff with rapid alerts and communication with a school safety platform.

"I would say that there wouldn't be a program that would have helped any better. [CrisisGo] was immediate. There was no PA system, there's no quick text or phone call to everyone. It was the quickest method that we could utilize and we're grateful for it."

West Michigan Academy of Environmental Science of Choice Schools Associates in Michigan successfully utilized CrisisGo to alert their staff of a safety threat and communicate their response when an individual sent an email to the principal of an elementary school and communicated that they were going to come to the school to do dangerous things.

Alan Bosker, Middle School and High School Principal for West Michigan Academy of Environmental Science informed that they utilized CrisisGo to immediately communicate out to their staff and initiated a lock down, which was no easy task given 850 students were involved. 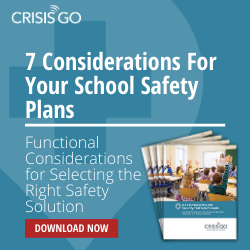 "We were able to go into lock down immediately, and in addition to that, we were able to communicate internally with as much as we could share with our team," stated Bosker.

He informed that after they realized that the threat was not credible, they opted to dismiss their 850 students, which posed a logistical challenge. Bosker stated, "Utilizing CrisisGo, we were able to communicate to the team." He informed that they communicated what the plan was to the staff members through CrisisGo, and the staff were re-assured in their roles for dismissal, which was conducted successfully.

According to Bosker, the event was a little traumatic for students and staff members, but he said that it could have been a lot worse. Bosker stated: "[CrisisGo] was tremendous. There isn't a system that I can think of that would have worked faster. At that point, fast and clear communication to every single person on our staff was necessary, so it was critical that day."

As an added benefit, CrisisGo's school safety platform runs on Amazon Web Services, which ensures West Michigan Academy of Environmental Science has the most reliable, secure, and redundant connection possible for their school safety needs.

According to Bosker, the staff found comfort in having a reliable channel for safety communication. He stated, "Overall they were pleased that they had a platform where they can communicate with each other. I think that's huge. When you have 25 little kids in the room and they're scared and externally you have the face of 'this is fine guys, no worries,' but internally you're fighting off the same questions that they have as 5-year-olds. You want to ask those exact same questions, but you're not sure who to ask them to, so having that platform was really helpful."

Bosker said he values the power of CrisisGo's communication capabilities. He added, "I think it's a tremendous resource. It's one of those things where I wish we didn't have to rely on it, but in this day and age, having communication and being prepared for the worst case scenario is absolutely necessary, and it's been a help. It's a reassurance for me honestly that if something were to go wrong, I have a back up. I have something to help support me."

CrisisGo coordinates alerts, messages, and notifications through communication and IoT devices across and within first responders, safety and security teams, organization stakeholders and their communities.